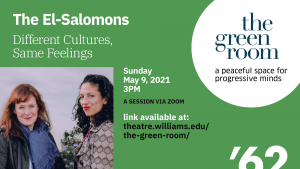 The El-Salomons are a married Jewish-Palestinian lesbian comedy couple who after years of performing solo decided to add yet another challenge to their relationship: A duo act!

Jess Salomon (The Tonight Show with Jimmy Fallon) and Eman El-Husseini (Just for Laughs) met and fell in love at a comedy club in Montreal a decade ago. After just one year of performing together this hilarious couple recorded a comedy special at the prestigious Just for Laughs Festival, now available in the US on YouTube. They are also the hosts of the top-rated podcast, “Comedians vs The News” on the BBC World Service wherever you get your pods!