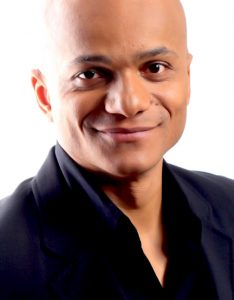 Chairperson and Professor of Theatre

Professor Sangare graduated from the National Academy of Dramatic Art in Warsaw, Poland, where he studied with the Oscar-winning director, Andrzej Wajda. He was awarded a scholarship to The British American Drama Academy in Oxford, England. While there, he worked with Derek Jacobi, Alan Rickman, Michael Kahn, and Jeremy Irons. Dr. Sangare holds many film, television, and radio credits. For his one-man drama “True Theater Critic,” he was voted The Best in Acting by The New York International Fringe Festival. The New York press acclaimed his lead part in the Arena Players Repertory Theater production of “Othello.” Barbara Delatiner wrote for “The New York Times”—“Omar Sangare was born to play Othello!” His published literary work includes two books of poetry “Landscape of the Soul” and “Postscriptum”; collections of bestselling short stories titled “Tales for Old Horse,” “Tales for Black Sheep,” “Tales for Decent Man”; as well as the most recent book “Othello. Pale from Envy” and many essays and articles for various magazines and newspapers. Accompanied by great American writers such as Robert Pinsky, and Susan Sontag, he promoted Polish literature in the United States. In 2011, he was selected by the U.S. Department of State for a video project that appeared as part of President Obama’s trip to Poland. In 2012, he was named “Person of the Year” by nytheatre.com for “a significant contribution to the NYC theater landscape.” In 2013, Sangare performed along John Guare in Atlantic Theatre’s “Three Kinds of Exile,” in a role, which Guare wrote especially for him. Dr. Sangare is a founder and artistic director of UNITED SOLO, the world’s largest solo theatre festival, a resident company at Theatre Row on 42nd Street in New York City.