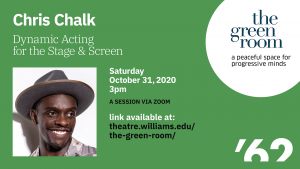 The series has been established by Omar Sangare, Chair and Professor of Theatre.
This event was made possible, in part, thanks to the Lecture Committee.

Featuring acclaimed film, television, and theatre actor Chris Chalk, the fifth session of The Green Room was two-hours of Q & A that broached topics including mental health, personal values, and the film industry. Chris began with a brief summary of himself and shared a number of principles he lives by: he strives to create his own views and opinions rather than be influenced by the noise; he works to take personal responsibility in all aspects of his life; and he continuously seeks out additional education. As Chris illustrated with examples from his career, these traits allowed him to persevere and find success in a highly-competitive industry.

Chris answered student and community questions and shared a number of lessons he learned from his career as an actor. He highlighted the importance of learning resource management. Chris spoke on not only establishing clear goals for the future, but relentlessly pursuing them and cutting loose anything, or anyone, that stands in the way. Personal freedom – the ability to be authentic, purposeful, and thoughtful – remains his ultimate career goal.

Chris provided a number of valuable insights on the film industry based on his experiences in Homeland, 12 Years A Slave, and Perry Mason. In particular, he emphasized the importance of kindness, cooperation, and understanding. Indeed, Chris acknowledged that such traits are not universal throughout Hollywood. Even so, he encouraged students to personify these traits so as to attract other like-minded individuals to create an environment that best supports their personal and career objectives. Additionally, Chris related the importance of thorough preparedness for auditions and roles. He provided students with tips for distinguishing themselves in front of casting directors by establishing personal connections and using performance anxiety to their advantage. Chris’s conversation focused on identifying students’ personal and career goals and using his own perspective to share advice as to how students can be successful in their own endeavors.

Chris Chalk is an American television, film, and theatre actor. Recently, he was seen in the role of Lucius Fox on Fox’s drama series, “Gotham,” which ended its fifth and final season. Last year, he had two projects released on Netflix. These included Ava Duvernay’s limited series, “When They See Us,” which came out in May, as well as Gideon Raff’s, “The Red Sea Diving Resort,” in which he stars opposite Haley Bennett, Chris Evans, and Ben Kingsley. Chris also plays the series regular role of Paul Drake in the upcoming HBO series, “Perry Mason,” which premiered June 21, 2020. Previously, Chris starred in the memorable role of Officer Frank in Kathryn Bigelow’s, “DETROIT,” and opposite Aaron Paul in Zack Whedon’s independent film, “Come and Find Me.” He also starred opposite Viola Davis and Jennifer Lopez in, “Lila and Eve,” which premiered at the 2015 Sundance Film Festival with rave reviews. Prior to this, Chris co-starred in Steve McQueen’s, “12 Years a Slave,” opposite Michael Fassbender and Chiwetel Ejiofor. On TV, Chris played Gary Cooper in Aaron Sorkin’s award winning HBO series, “The Newsroom.” He previously played the role of Tom Walker on Showtime’s Emmy Winning Series, “Homeland,” and recurred on USA Network’s, “Complications,” and WGN’s, “Underground.” He also guest starred in hit series such as in CBS’s, “Unforgettable,” FX’s, “Justified,” “Persons of Interest,” “Nurse Jackie,” “Law & Order: SVU,” “The Good Wife,” “Rescue Me,” and “Law & Order: Criminal Intent.” In 2010, Chris received the Recognition for Outstanding Broadway Debut at the 66th Annual Theatre Awards and was awarded a Drama Desk Awards Best Featured Actor Nomination for his portrayal of Cory in August Wilson’s, “Fences.” Chris starred opposite Denzel Washington and Viola Davis in the Tony Award Winning Broadway show. Chris’s previous stage work includes Lynn Nottage’s Pulitzer Prize winning play, “Ruined,” “Unconditional,” (LAByrinth Theatre Company, The Public Theater) “Defiance,” (Manhattan Theatre Club City Center) “The Overwhelming,”(Roundabout) and most recently played a death-row inmate in Nathan Louis Jackson’s, “When I Come to Die,” (Lincoln Center) directed by Tony Award-nominated Thomas Kail. Previously, Chris starred in Focus Features’, “Being Flynn,” playing Ivan opposite Robert De Niro and Julianne Moore, and has appeared in a variety of films such as the hit film based on the Broadway musical “Rent,” “Before the Devil Knows You’re Dead,” “The Architect,” and “Then She Found Me.”