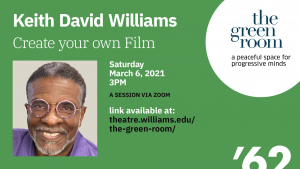 Keith David Williams,
students will be in conversation with an Emmy-winning actor,
voice actor, and producer. His extensive career has included roles in
Requiem for a Dream, Armageddon, and
a wide variety of voice acting roles in films, shows, and video games.

Keith David is a classically trained actor, Emmy Award winner and Tony Award nominee. Born and raised in New York City, Keith is a graduate of the New York High School of the Performing Arts and the Juilliard School. His expansive film credits include 21 Bridges, Night School, Disney’s The Princess and the Frog, Requiem for a Dream, Men at Work, They Live, Crash, There’s Something About Mary, The Thing, Platoon and many others. Keith completed 5 seasons starring in “Greenleaf” for Oprah Winfrey’s OWN network.

Other TV credits include “NCIS: New Orleans”, “Blackish,” MacGyver”, “Fresh Off the Boat,” “Community”,”Enlisted”, and “Mister Rogers Neighborhood.” His voice over work has earned him three Emmys for narrating Ken Burns’ “Jackie Robinson”, “The War”, and “Unforgivable Blackness – The Rise and Fall of Jack Johnson”. Some of his other voice acting credits include “Adventure Time”, “Bojack Horseman,” “Rick & Morty”, “Spawn”, and “Gargoyles.” On Broadway, he starred in Seven Guitars and Jelly’s Last Jam (Tony nomination). As a singer Keith has toured for the past several years with “Too Marvelous For Words,” in which Keith recreates Nat King Cole. Keith is currently creating a show about legendary jazz singer Joe Williams.