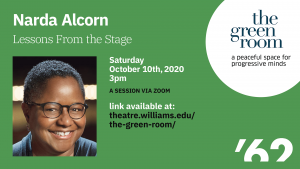 The series has been established by Omar Sangare, Chair and Professor of Theatre.
This event was made possible, in part, thanks to the Lecture Committee and the Oakley Center for Humanities & Social Sciences, and to
Professor Dorothy Wang, Chair of the American Studies at Williams

The third session of “The Green Room” — a series where acclaimed theatre professionals share diverse viewpoints, experiences, and lessons with the Williams College community — featured Yale Professor and Stage Management Chair Narda Alcorn. Professor Alcorn shared her journey from attending college in Chicago to entering the Yale School of Drama, where she engaged in meaningful collaborations with Kenny Leon and August Wilson. Leon taught Alcorn the importance of the individual in theatre; she learned to adopt a person-first management style rather than one that focuses on hastily producing a final product. In what she describes as the “ethics of care,” Alcorn realized that this theory had great potential for application in stage management. From prioritizing the safety of cast and crew members to valuing every member of the performance and crew teams — putting people first — Alcorn’s post-graduate work was essential in teaching her how to create an environment of mutual trust and equity. Alcorn’s 10-year collaboration with August Wilson furthered this sense of care. Later, in her more-than-a-decade-long work on the Broadway production of The Lion King, Alcorn described how she met the challenge of working with a company of cast and crew of nearly 150 individuals. This experience heightened her appreciation for recognizing those individuals working “behind the scenes” to ensure that a show runs smoothly. Finally, Professor Alcorn took part in an engaging question-and-answer session with Green Room attendees where she elaborated on stage management as a career path; her work across multiple genres of theatre; and responding to challenges of equity on and off the stage.